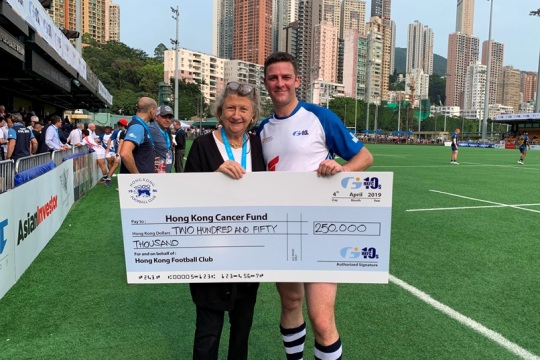 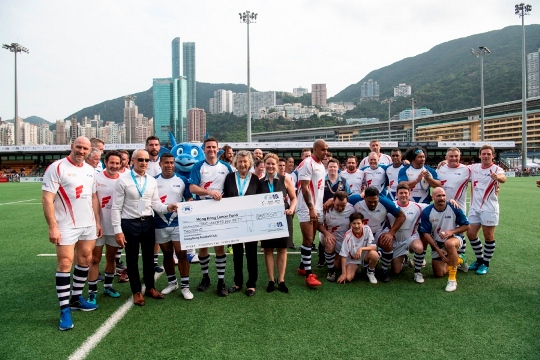 The cheque presentation photo of Sally with all rugby legends who played at the Tackle Cancer charity match.

The cheque presentation photo of Sally with all rugby legends who played at the Tackle Cancer charity match.

Sally Lo, founder and Chief Executive of Hong Kong Cancer Fund, received the cheque from Gareth Wilde, Chairman of the tournament’s Organising Committee. Lo watched the match and was delighted with the 10-a-side touch game, which also included local amateurs and sponsors.

“It has been such a memorable day. I don’t think I’ve ever been so excited as I was when I spoke to the players in the changing room before the match! They’re a great group, giving their time up to come and play. What a fabulous, fabulous match. I was blown away. I’m a real fan now,” said Lo, who founded the organisation in 1987.

“The cheque was more than double what we expected, so we are absolutely over the moon. Not only that, this event also brought home the reality that cancer touches us all in one way or another, so we’re absolutely delighted to be part of this wonderful tournament.”

Leonard, who won 114 caps for England and five for the British and Irish Lions, enjoyed being among so many famous players helping the cause.

“It was great fun, especially when you see people like Serevi still strutting his stuff, Campese doing his trademark steps, then you see Simon Shaw and his first touch is to knock it on five yards,” laughed Leonard.

“I think rugby’s quite unique. We do try to give back, we do try to support as many people as we can and you have so many famous players here for this. This is such a great idea, so credit to Gaz Wilde and the organising group who put this together. It’s a fantastic opportunity for us to help kick cancer into touch.”