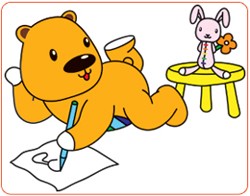 The saying “misfortunes never come singly” is an apt description of Ng Kam-mui’s life in recent years. First, her husband fell victim to cancer and became so depressed he killed himself. Not long after that, Ng herself was diagnosed with breast cancer.

It was a lot to deal with all at once. There was shock and grief at her husband’s suicide, and stress over her illness, which required many rounds of treatment and eventual surgery. Ng found it beyond her to care for her daughters, Lily and Hoily, then 10 and five years old respectively.

“I had to ask their grandparents to help. I felt sad having to mess up our relatives’ lives,” Ng says. “All I wanted was to get the operation over with and recover quickly. But it was hard to break the news to my children.”

News of her mother’s illness hit Hoily particularly hard. She became increasingly anxious and wouldn’t let Ng go out without her. That made getting to treatment sessions and doctors’ appointments challenging.

A nurse at Tuen Mun Hospital, where Ng was being treated, referred her to the Rainbow Club, a service developed by the Hong Kong Cancer Fund (HKCF) to help the children of cancer sufferers. HKCF founder and chief executive Sally Lo describes the service as filling a gap in its range of programmes. “We have a bereavement programme for kids whose parents or family members passed away from cancer, but [no programme] speaking to children of patients who have been diagnosed with cancer but are still alive,” Lo says.

“The Rainbow Club hopes to pick up from when the family member is diagnosed, and hopefully follow through all the way until the patient is back to health. From our experience, very often children are not told about what’s happening, especially in Chinese families.”

While cancer sufferers need the support of family and friends, they should also pay attention to their children. They will inevitably be affected, says HKCF art therapist Maria Pang Sau-chi. “Children don’t know how to react or how to deal with emotions like fear and stress. They will be depressed by not knowing how to deal with the situation,” Pang says. “Kids can usually see the [physical] changes in their parents – they become thinner or weaker – even if they haven’t been told the illness.

“Some parents find it hard to tell their children. They think they may not understand, or hope to spare them the worry. They’re also afraid of not being able to answer the questions that children may have.” But children usually notice that something is wrong. “They may find they’re getting less care from their parents and think that they are not loved or they’ve done something wrong. The fear of death, unanswered questions and worry needs proper professional help.”

Anxiety in younger children is often manifested in symptoms such as a decline in school results, youngsters wetting themselves even when well past the potty age and nervous habits such as nail biting. Teenagers who are old enough to understand will become worried about their parents. But some who don’t know how to express their feelings may assume indifference, which may lead to problems with concentration and communication with peers.

At the Rainbow Club, a team of social workers and child experts provide patients’ children with individual counselling, art therapy and workshops that help them understand cancer. They also get peer support through a mentorship programme with university students and young adults.

Ng is glad she sought help from the Rainbow Club rather than trying to deal with her problems alone. Volunteer mentors helped Lily with schoolwork, and art therapy gave Hoily a useful outlet to vent her negative emotions.

The little girl had become quiet, and it was only after several art therapy sessions at the club’s Tin Shui Wai centre that they realised the extent of her distress.

“It’s sometimes very hard for children to articulate their feelings because they have a limited vocabulary. Drawing, art-related activities and roleplay are used to get them to better understand their emotions,” Pang says.

“We want them to know that emotion stands for energy in motion. Everyone has emotions and they are neither good nor bad. But there are constructive or destructive ways to express them.” Hoily was taught to express her emotions in different ways: music, body language, facial expressions and art. One of her drawings showed her and Lily crying against a background of a storm with heavy rain and lightning.

She drew a flooded land with dead plants, and a house with a broken heart above the door. This was a representation of her fear.

Hoily’s mentors soon learned that the child was worrying about what she would do if she lost her mother as well as her father.

If children are offered a safe place and some trusted listeners, they express their emotions. This is crucial to arranging proper follow-up counselling. They are also encouraged to participate in group tutorials, so that they won’t feel alone and others can offer solutions.

Some workshops are designed to facilitate communication so that family members can understand each other better. That is how Ng learned to deal with her children’s emotions and help them become less insecure.

Because they were able to make friends at the centre, the girls also became more cheerful and less dependent on their mother, which allowed Ng to concentrate on beating her cancer. Now recovered, Ng regularly visits the club’s three centres as a volunteer. She teaches bead art in hobby classes for families. The club has given her family so much help and support, she says. “I want to give back and help it go forward.”