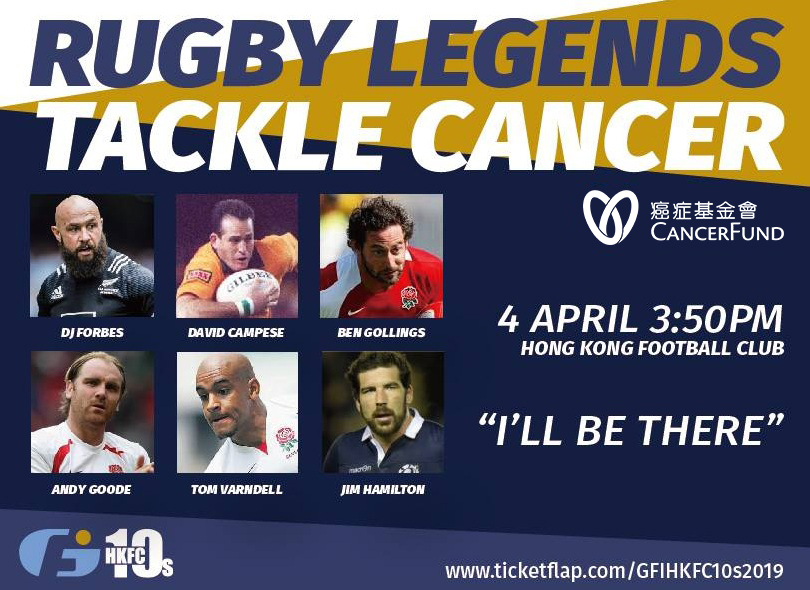 The exhibition match will help raise money for the Hong Kong Cancer Fund, the official charity of this year’s GFI HKFC 10s. Founded in 1986, the GFI HKFC 10s is the world’s leading 10-a-side rugby tournament and is held annually at Hong Kong Football Club on the Wednesday and Thursday ahead of the Hong Kong Sevens.

Forbes, 36, was a long-time All Blacks Sevens captain who six World Rugby Sevens Series titles, and the all-action forward still tops the table for most matches played (447) on the global circuit. Gollings, 38, is the Sevens Series’ all-time leading points scorer (2,652) and, like Forbes, won the Hong Kong Sevens on multiple occasions.

Fiji back Sam Viriviri, the 2014 World Rugby Sevens Player of the Year, and Tom Varndell, the former Leicester and Wasps wing who played England Sevens and 15s, will also play in the charity match while in Hong Kong as marquee players for the South China Tigers team competing in the Grand Rapid Rugby Showcase Series.

The legendary Campese, a Rugby World Cup winner and the third-highest test try scorer of all time, has also committed to lacing up his boots along with fellow Wallaby Justin Harrison, the 6ft 7in lock who helped Australia reach the 2003 Rugby World Cup final.

The match will be a 10-a-side touch contest, with each team mixing current and former rugby stars with amateurs, and will kick off at 3:50pm, ahead of the two Cup semi-finals. Money will be raised by sponsorship, participation and on-site donations.

Gareth Wilde, Chairman of the tournament’s Organising Committee, said: “The GFI HKFC 10s has always featured great players and many legends watching in the stands because of its place in Hong Kong’s rugby week.

“We had been thinking of creative ways to raise money for our official charity, the Hong Kong Cancer Fund, and the idea of an exhibition match proved very popular with the players we approached. So far, I’m very happy with the quality of players who have confirmed and we expect to announce a few more, as they all seem happy to help such a great cause.”

Sally Lo, founder and Chief Executive of the Hong Kong Cancer Fund, is delighted the organisation’s partnership with the GFI HKFC 10s is helping raise awareness of the charity, which is the city’s largest cancer support organisation, providing free information and professional support to anyone living with or affected by cancer.

“It is always great to have so many high-profile players supporting your cause, especially when it’s during Hong Kong’s world-famous rugby week,” said Sally. “The Rugby Legends Tackle Cancer charity match will be a great success, and we look forward to working with the tournament to help raise as much awareness and money as possible.”

GFI HKFC 10s tickets are on sale at: www.ticketflap.com/gfihkfc10s2019